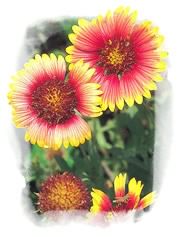 Landforms and climate in Penghu are special compared to others. For example, its surface soil layer is quite thin and therefore the function of keeping water is not very good. It is called a dry breeding environment. Except for drought, Penghu suffers from strong wind and salt disaster brought by typhoons. These disasters cause plantations to grow their leaves thicker and covered with fuzz to store water better. The number of important plants can reach more than hundreds.

Pagoda trees are the most common plant, one of them is Tong-lian pagoda. It is the county tree because of its outlook; and the county flower Gaillardia pluchella Foug is also the strong plant grown all over Penghu. Besides, with its unique biological environment, there are also many valuable plants only can be seen in Penghu such as Ipomoea imperati (Vahl.) Grisebach, Myoporum bontioides A. Gray, Scaevola hainanensis Hance, Cassia sophora L. var. Penghuana Y.C.Lin & F. F. Lu , Glycine taacina (Labill) Benth, Justicia cilata (Yamamoto) Hsieh & Huang, and Sida veronicaefolia Lam . And some of them can be made for people to drink for body health.

Earlier people in Penghu use special stones to build wind proof walls and cultivate their farmlands in beehive shape. These are characteristics of Penghu that people grow grain corns, peanuts, sweetpotatos on ordinary famrs and grow vegetables and fruits within the walls. Also they grow many kinds of important and famous cash crops.
The government plant forestation trees for wind-proof and beautification purposes. Their skills improved gradually. Also we see mangrove in Penghu which adds vitality for the coast.

The seaweed recource is rich in Penghu and is also the first in Taiwan. Among Cyanophyta, green algae, fucoid and red algae, 40 kinds of them can be found in Penghu. Some of them are of cash value and mostly they are produced in winter from December to March. Presently, they grow these crop naturally and by breeding.

From the biological geograph point of view, the coral reef biologic system around Penghu isles belongs to the Indian-Pacific system. To Penghu, The Japan Current tides stretch their bayous into Taiwan strait and become obviously one important reason why corals live well in Penghu water area. They include madrepore and many other kinds of corals.

Madrepore forms the coral reef mostly seen near the front endof the intertidal zone along coasts. some of them stretch outward for more than 10km. we can see some distribute in belt shape near the outer sea of Long-man harbor. Others can be found in the water area near east yuanbay isle, south bird isle and chimay isle. But soft coral needs cleaner water to grow, therefore, it is less seen in the Penghu water area compared to madrepore.

What is worth mentioning is that there is a coral forest made by scallop soft coral and soft coral and it is indeed a very unique undersea biological view. 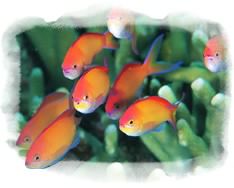 Fish in this area can reach at least 145 families and 700 species according to surveys. Most of them are Perciformes of hardbone fish category. And these are the common fish species that survive in the reef rock sea area. As to the Penghu fishery resources, it is long lasting because of the rich and various grown fish supply and the rich young fish resource. Mostly, the young fish species include red sea bream, Lethrinidae, Sphyraena japonica and Fuscous spinefoot. Every May and June, people see the magnificent view of these young fish swim in big crowd.

As to the along the coast seabed rest fish category, groupers are the most common. They mainly inhabit in the reef rock area at the shallow sea. Others are Cromileptes altiveilis (also called mouse grouper ) or Leopard coralgrouper (also called?o±o). Also in this area, there are many smaller but colorful species such as labroid family, Chaetodontidae, and sparrow porgy family. Other fishery resources such as shellfish, carapace, and echinoderm are of rich reserves.


Green Turtle, which is quite seriously taken in the recent years though, is haning a decreasing population getting less and less. And Penghu is one of the areas that Green Turtle regularly go and lay eggs. Therefore, Green Turtle also becomes one of the valuable pronouns of Penghu. Another valuable animal in Penghu is dolphin. Dolphins belong to small tooth-whale category and have as many as 260 tooth. The Penghu people call them "sea pig","sea mouse" or"black russian". Their IQ can be compared to primates. Dolphins use sounds to exchange signals and contacts. From every winter to the end of next March, they swim in groups in the outer sea of Penghu. The main species include Spinner Dolphins, Gill’s Bottle-nosed Dolphins and Bottle-nosed Dolphin. Once in a while we can see smaller False Killer Whale too.

The bird resources in Penghu is so rich that people call it the paradise of birds. As the midway stop on the immigration route of east-asia migrant birds, panghu therefore is with various kinds of birds. According to a survey in 2003, birds in penghu are as many as 14 ,40 family , and 317 species. One thing unusal is that birds that are found and being recorded in penghu are 410 species, which are three-fourth of the number of Taiwan. And to analyze those records, it’s easy to find out that only one-fifth of these birds stay. Therefore, migrant birds are still the main kinds of it.

The migration of Penghu birds are the most frequent from January to april every year, and then it lessens after may. June and July are the two months with the fewest birds. But this period of time is also the most special time for the birds of scray family on isles like damow, hsiomow, jishan and dinggou. In autume like September to December, it is the second best season for birds to move and also it is the time when migrant birds are ready to go south for winter. Generally speaking, different families of birds in Penghu get to different inhabited locations. For example, the between-tide zone by the isle coast (Scolopacidae!K), reservoir area (egret, teal...), the windbreak forest or farming land (Thrushes, Fringllidae or Sylviidae!K), and depopulated isles at the Nanhai sea (Laridae!K).
展開/收合
top