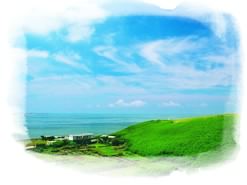 The strong monsoon is a special natural phenomenon in Penghu. Penghu is located in the monsoon standard area and when the northeast monsoon during autumn and winter goes through Taiwan Strait which shaped like a tunnel, its blast strengthens and often bathe Penghu in its chilly wind. Under this monsoon system, Penghu area is bathed with the wind from high latitude in winter and mostly northeast monsoon. Due to the lack of landform protection, the wind speed in Penghu is quite fast in winter and usually it is at least 6m/sec (which equals level 4) from October to next Januarary. However, when there is continental cold air mass coming toward south, the wind speed could reach level 8 and sometimes 12. Above the ocean, the wind speed
The wind velocity changes greatly in Penghu because of the ocean. Every winter from October to March, the percentage for the wind velocity to be over 10m/s is 56% and in summer is 7.5% only. And the percentage for the wind velocity to be under 5m/s is only 15% in winter and 54% in summer. This reduces winter activities in Penghu and the number of tourists. This is what we called the dull season of Penghu.
Daily change of the wind direction and wind velocity is not obvious. In other areas such as Taiwan or neighborhood ocean areas, land winds and sea winds circulate. Daytime in summer, the wind blows from ocean to land, and in the evenings, it blows from land to the ocean. But Penghu is surrounded by the ocean and with little measure of the area, therefore there is not enough gap to produce this circulation. Thus, in all winter, the northeasterly wind blows and in all summer, the southwest wind blows.
展開/收合
top